STATEMENT FOLLOWING THE DEATH OF Her Majesty THE Queen, Elizabeth II

The Officers and members of Las Vegas Purple Star, Loyal Orange Lodge #212, are very saddened to hear of the death of Her Majesty, Queen Elizabeth II.
In an ever changing world, she has been a source of stability, dedication and duty. Much admired for her selfless devotion, faith and public service.
We Offer our condolences to The Royal Family and Commonwealth family members of our community in Nevada, mourning their loss at this time. 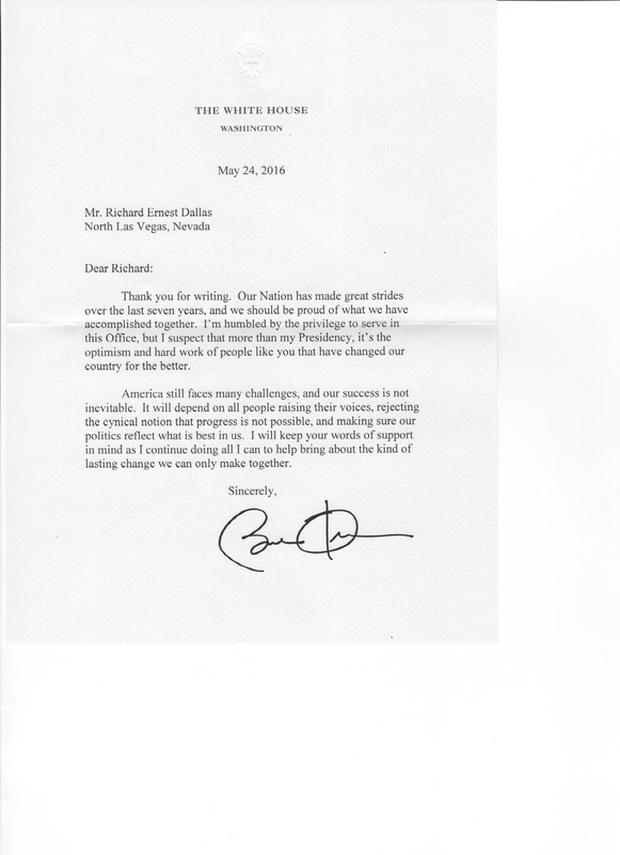 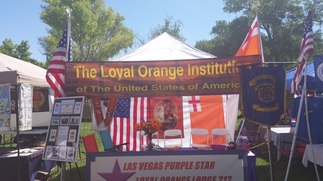 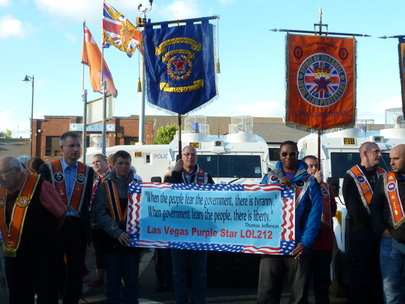 Two members of Las Vegas Purple Star L.O.L. 212, delivered a protest banner to fellow Orange Brethren and Sisters at Twaddell Avenue, North Belfast, Northern Ireland. The protest is against restrictions to assemble and parade, placed on the Orange Order in Northern Ireland. Las Vegas Purple Star opposes these restrictions and support civil and religious liberty for all, regardless of politics, race, culture or religion. This banner of solidarity across the 'Pond' is still proudly displayed at the protest encampment. 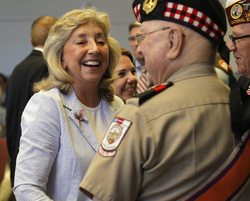 Bro. Rev. Dr. Reid conducted the invocation as Veterans were honored at Boulder City Memorial Day ceremony. Bro. Reid, a retired Marine chaplain and member of Las Vegas Purple Star LOL 212, led the prayers in the presence of the Govenor of Nevada and many other Federal and State officials.

Bro. Reid said " It was an honor to lead the religious element of the service to remember not only our fallen but to remember the loved ones left behind. Freedom is never free and we must thank God for his providence and the sacrifice good men and women have made." 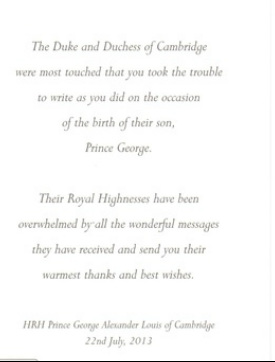 Letter of Appreciation From Royal Family 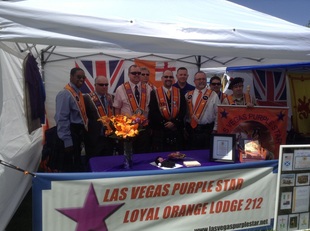 No one knows his name or what he looks like, but His Royal Highness Prince “insert name here” of Cambridge might be the most famous baby in the world.
Third in line for the throne, the smallest prince was born Monday afternoon to the Duke and Duchess of Cambridge, Prince William and Kate.

The youngest royal has sparked celebration throughout parts of the world, and the Crown & Anchor British Pub on Tropicana Avenue near Maryland Parkway and the Little Crown & Anchor on Spring Mountain Road near Decatur Boulevard are jumping in on the joyous occasion.
“There is a tradition in England after a baby is born,” Crown & Anchor owner Ron Schultz said. “We’re going to ‘wet the baby’s head.’ In the old days, they didn’t have phones. They would go down to the pub, and that’s how information was shared.” Wetting the baby’s head is a celebration of new life with a pint of ale at the local pub.
“I think this baby is like the North West (the child of hip-hop artist Kanye West and Kim Kardashian) of the U.K.,” Santos Gomez said as he drank deeply of his Newcastle beer.  The Crown & Anchor pubs will toast the royal heir with half-off British beers and ciders from 6 p.m. to midnight today . “It’s good for the country,” said Little Crown & Anchor patron Jon Carpenter, who hails from London. “It gives them the future ... (and) peace of mind to the Queen of England that her whole family will perpetuate in longevity.”

The Las Vegas Purple Star, Loyal Orange Lodge No. 212 also sent out a statement toasting the birth of the royal heir.
The organization, the Loyal Orange Institute of the United States of America, is a religious fraternity that comes together to ensure that civil and religious liberty is maintained, according to a press release.

In a letter addressed to the blossoming family, congratulations were extended.

“We recognize the significance of this occasion for our Orange brethren in the United Kingdom and the British Commonwealth, and as brothers, we wish them every joy in their celebrations today,” Lodge No. 212 secretary Richard Dallas wrote.

June LeMay, general manager of the Crown & Anchor pubs, found out about the royal heir in a morning phone call with her mother in London.
“I was on the phone with my mom,” LeMay said. “She called me right back to say that (Kate) had the baby. We got it before the Internet.”
The royal family’s delight at the birth of the bouncing baby boy was shared by British citizens. “We were genuinely happy,” said Simon Lader, who is moving from Manchester to Las Vegas on Sunday with his wife and two sons. “OK, it might be the future king, but it’s still a young couple who haven’t had it easy, and they’ve been blessed with a healthy baby. As a dad of two, I was delighted.”